When it comes to protecting your car’s paint from the elements, there are a ton of different options out there. Some people prefer to go with a tough clear coat, which is designed to act as a first line of defense against the elements. This clear coat is made up of special polymers and resins that seal in your paint and protect it from scratches and chips, making it extra durable. However, while this protective coating is certainly helpful, it does have its own drawbacks. For one thing, these coats are only as strong as they are thin and can still chip or crack under heavy impact, leaving your car vulnerable to further damage.

Another way you can protect your car’s paint is by using a paint protection film. Unlike clear coats that just rest on top of your paintwork, this protective film actually bonds into the surface itself. Made from flexible polyurethane layers that conform seamlessly to all surfaces of the vehicle, this film acts as an impenetrable barrier between your paint and harmful debris like rocks and gravel. And since incorporated UV inhibitors help keep color vibrancy intact for years to come, you can preserve the look and feel of your car’s exterior for much longer than with traditional paint protection products. 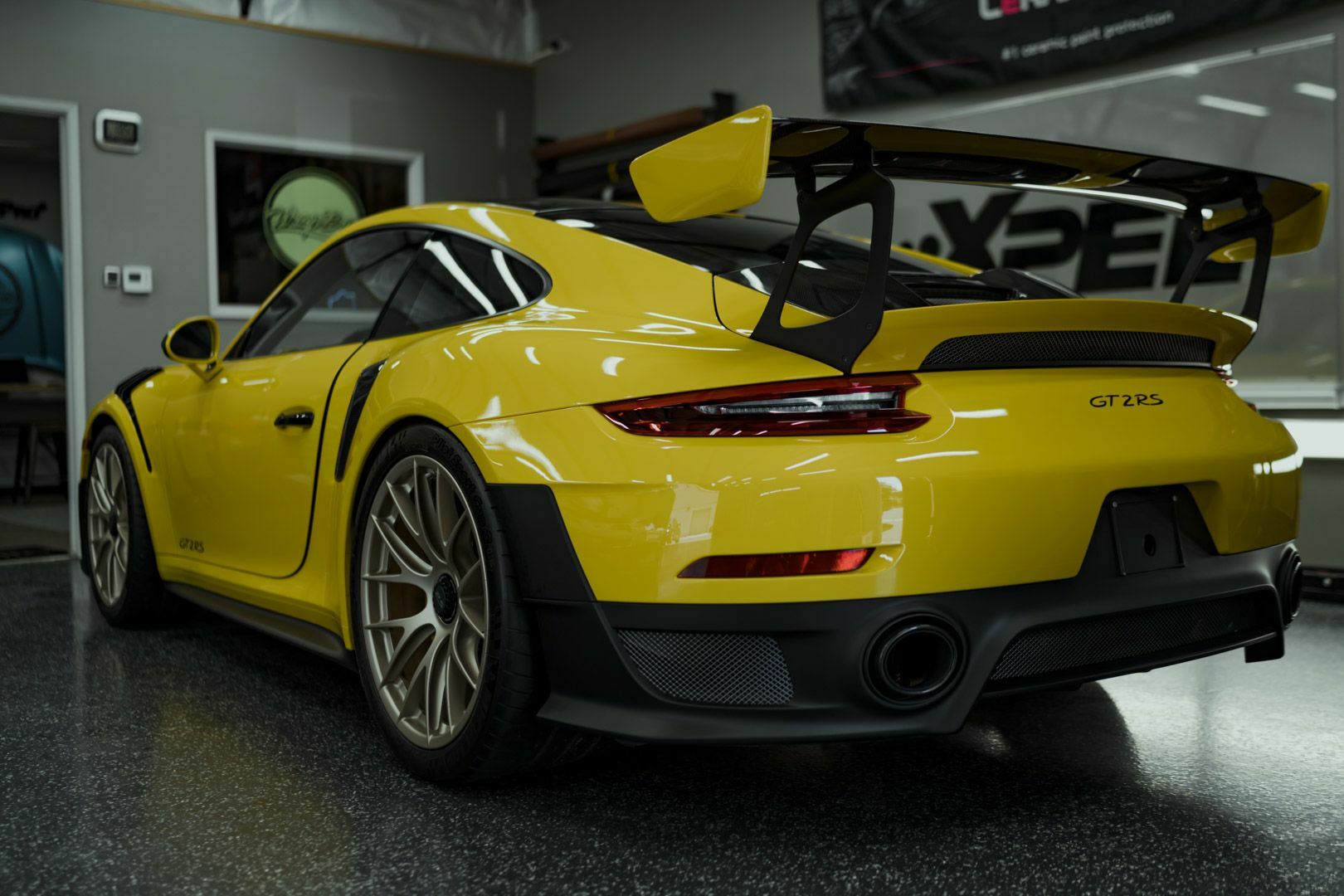 Paint protection film, or PPF for short, has become increasingly popular in recent years as more and more drivers are looking to preserve their car’s paint job from exposure to the elements. And while this may intuitively seem like a good idea, many people still have a lot of confusion around what PPF can actually do and how effective it is under extreme conditions.

There are definitely advantages to using PPF, as it can help protect your car’s paint from scratches, dings, chips, and other forms of damage that might be caused by everyday wear and tear. At the same time, however, there are also some limits to what Paint Protection Film can achieve.

Overall though, when used correctly PPF is still an incredibly useful tool for protecting your car’s paint job. So if you’re considering getting Paint Protection Film for your vehicle, don’t let all the hype about its pros and cons deter you – just make sure you do your research first!

So what exactly is PPF? 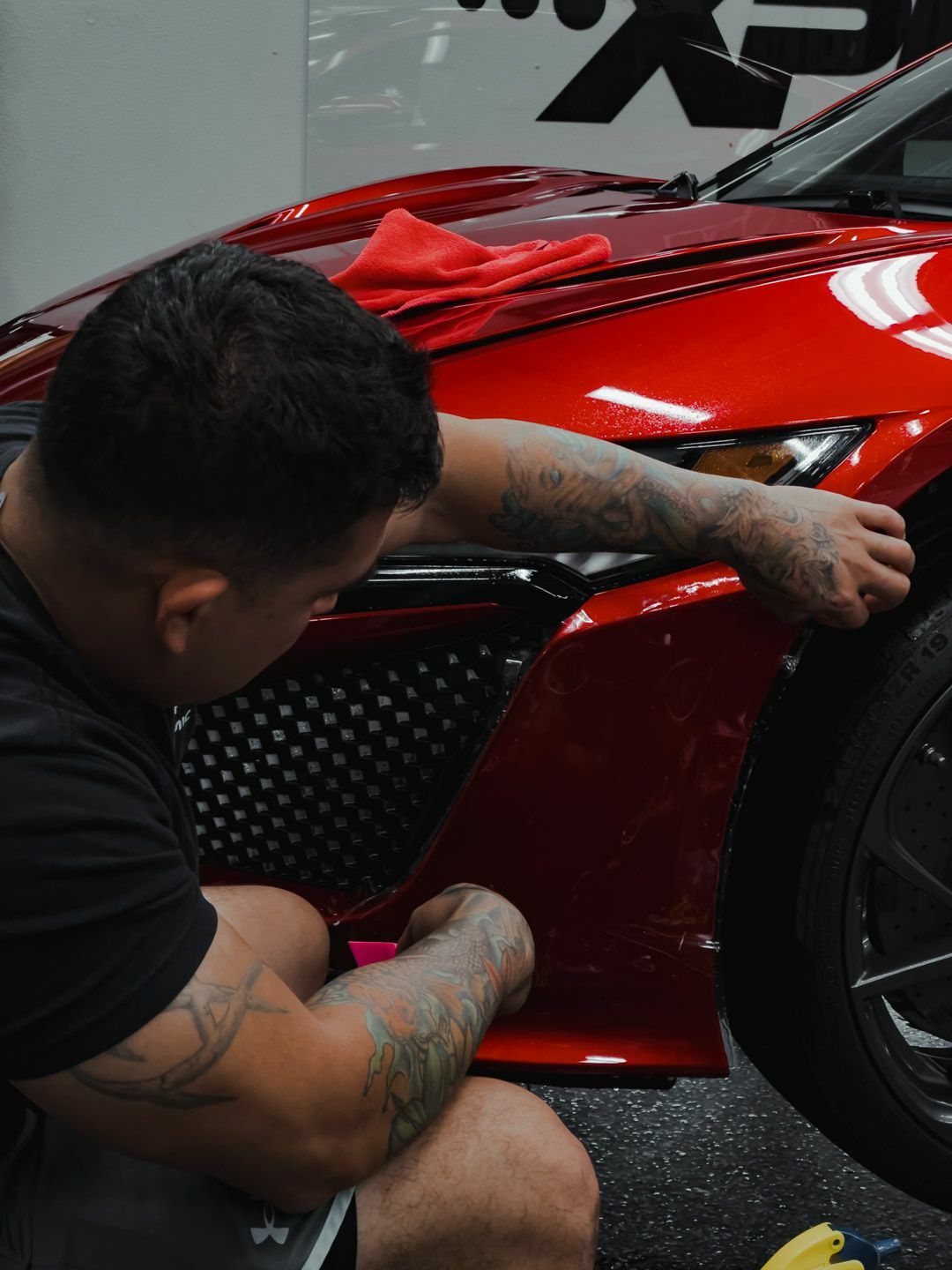 Paint protection film was not originally intended for automobiles or civilian use, but was developed as a tool for military operations. It was the height of the Vietnam War, and the U.S. Department of Defense (D.O.D.) was receiving one report after another of helicopters being significantly damaged by shrapnel upon returning from combat missions. In an effort to protect these costly assets and the brave men and women who pilot them, 3M developed a product called Scotchgard Paint Protector, which was applied to the leading edge of helicopter blades. This thin, clear urethane film provided an invisible barrier that absorbed the impact of debris, keeping the blades intact and functional. And while this Paint Protection film (PPF) may have been designed with aviation in mind, it didn’t take long for car enthusiasts to see its potential on road vehicles. Thanks to its durability and self-healing properties, PPF has become an increasingly popular way to preserve the beauty of automotive paint finishes. Whether you’re looking to protect your daily driver or preserve the value of a collector car, Paint Protection film is an investment that is sure to pay off in the long run.

Before long, the U.S. military was presented with what appeared to be a solid solution to its chopper problem. By modifying the chemical structure of a super strong urethane film, 3M’s engineers had developed a product that could withstand both significant amounts of elemental abuse, and moderate surface damage from things like artillery shrapnel. Inexpensive, relatively easy to apply and replace, this new paint protection film (known as PPF) quickly became standard issue for all branches of the military. Not only did it keep choppers looking good, but it also saved the lives of countless service members by providing a layer of protection against enemy fire. 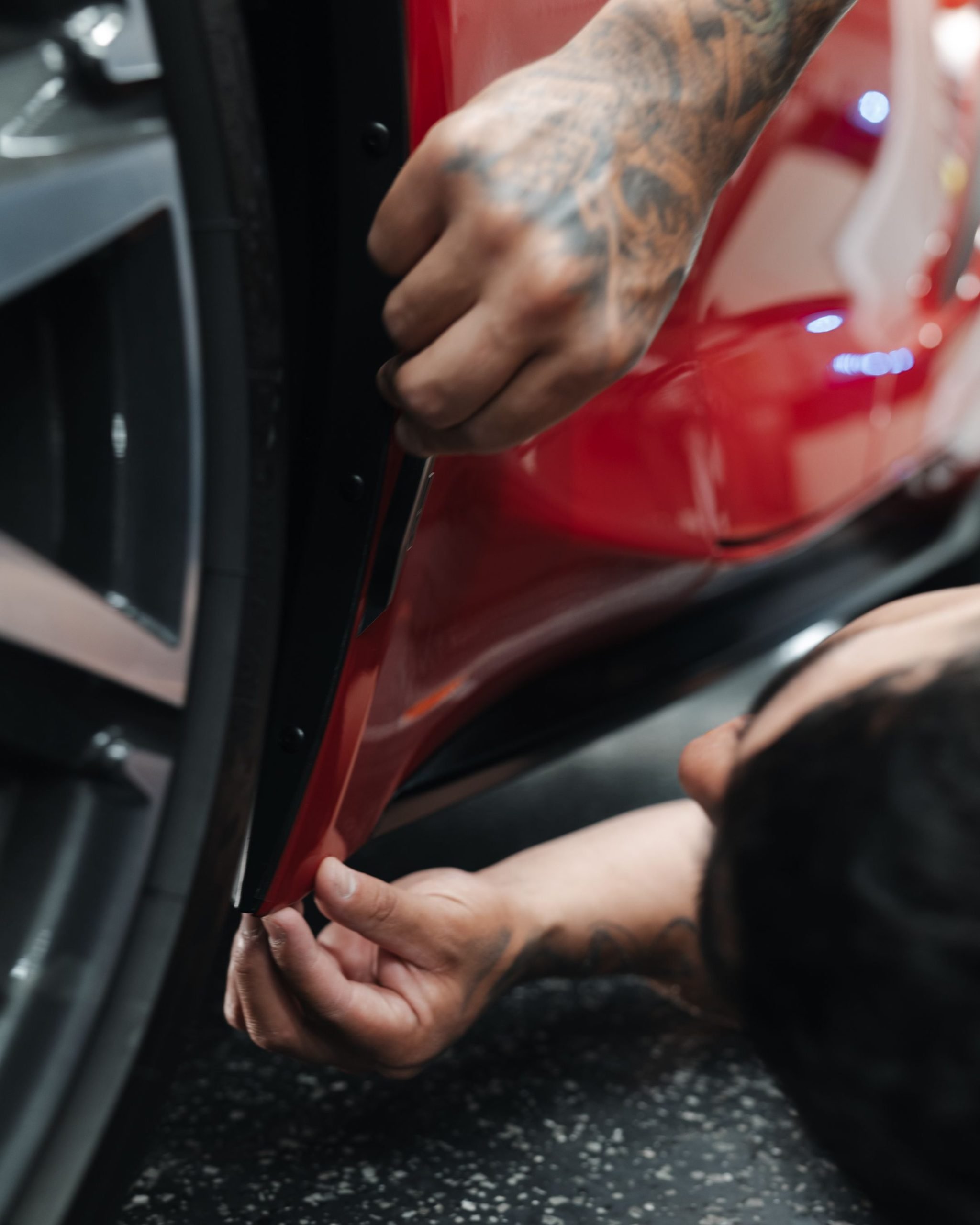 Who would have thought that a simple piece of plastic could have such a profound impact on the auto industry? Paint protection film (PPF) was first developed for use on military aircraft, where it was prized for its ability to resist abrasion and protect against UV damage. Eventually, high-end car owners and detailing shops began to buy more of these pricey film coatings, as their protective benefits and projected longevity indeed lived up to the hype. Everything from bug splatter and bird droppings, to surface scratches, rock chips, and all manner of oxidization and UV damage were rejected by PPF, and it looked like the product was set to become one of the most popular aftermarket treatments available.

What PPF is made of?

The key ingredient in PPF is urethane, a powerful and versatile polymer made from carbamate links. As a compound, it has unique attributes: It is lightweight and transparent, like plastic. But unlike plastic it is not brittle or susceptible to tears and cracks. It has a high resistance to impact, abrasion, and corrosion. It is also incredibly flexible, and can return to its natural shape after being stretched or compressed. In short, PPF is an amazing material that can be used to protect your car’s paint job from all kinds of damage. Thanks to its superior properties, PPF is quickly becoming the go-to choice for car enthusiasts who want to keep their cars looking new for years to come.

Have you ever wondered what gives your bathroom caulk its waterproofing properties? Or what makes those boat hulls so resistant to damage? The answer is a versatile polymer called urethane. Urethane is a type of plastic that can be molded into any shape and hardened into a solid state. It is also highly resistant to water and fungus, making it an ideal material for caulking and coating. In addition to its industrial applications, urethane is also used in a variety of recreational products, such as skateboard wheels and paintball guns. So next time you see a product made of urethane, you’ll know that it’s not just any ordinary plastic. 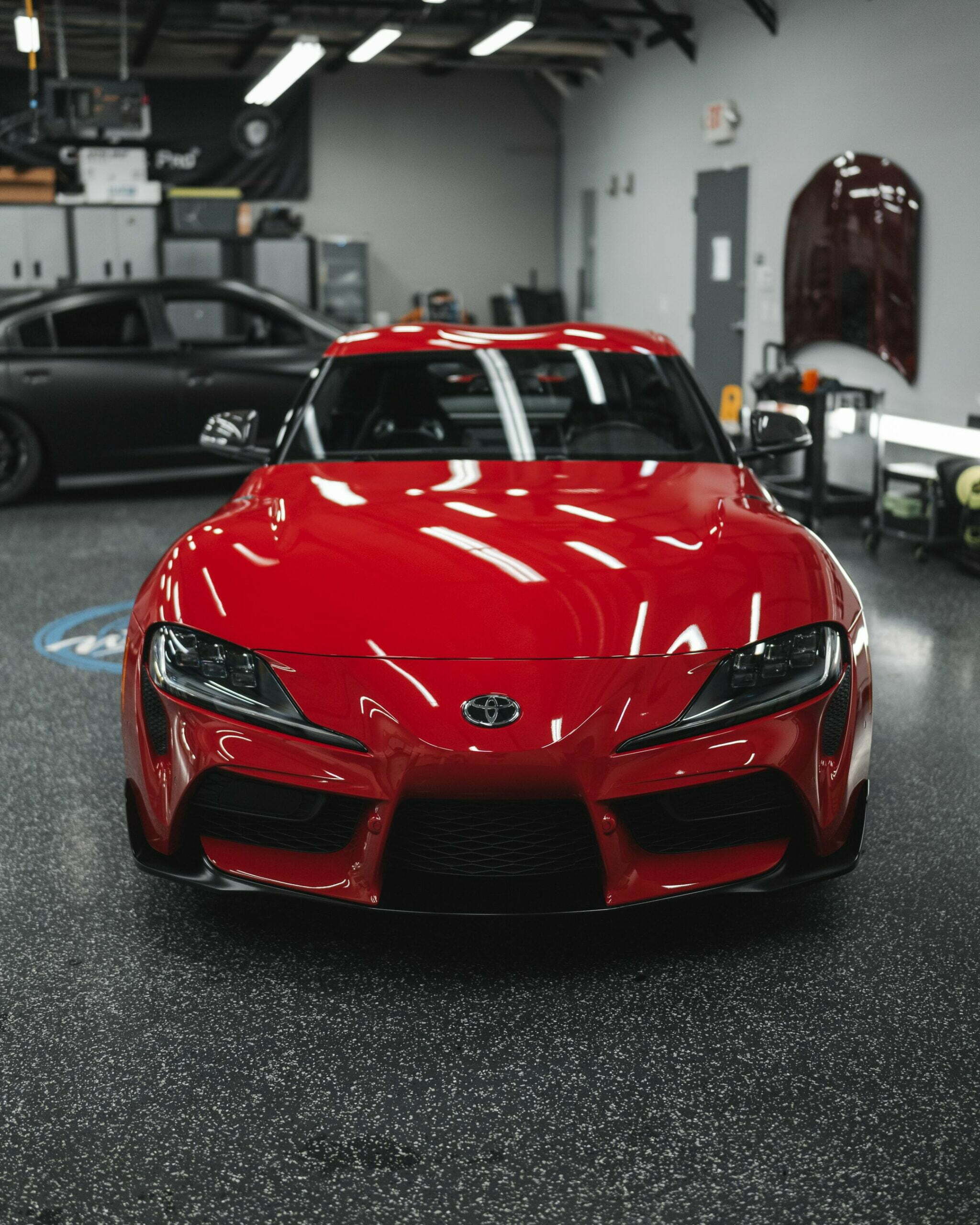 In addition to the central layer made up of urethane (or polyurethane), a quality Paint Protection Film has at least two other layers. First, the top is lined with clear coat made up of elastomeric polymers. As we mentioned above, this is the part that enables a good film to heal itself from small scratches. But it does much more. The clear coat on a good film will have a low surface energy, which means that it will resist dirt and stains and make it easier to clean the PPF itself. The bottom layer is also important, as it helps to protect the paint from abrasion and UV damage. Together, these three layers form a tough barrier against the elements, helping to keep your car’s paint looking like new for years to come.

Some Advantages to getting XPEL Paint Protection Film 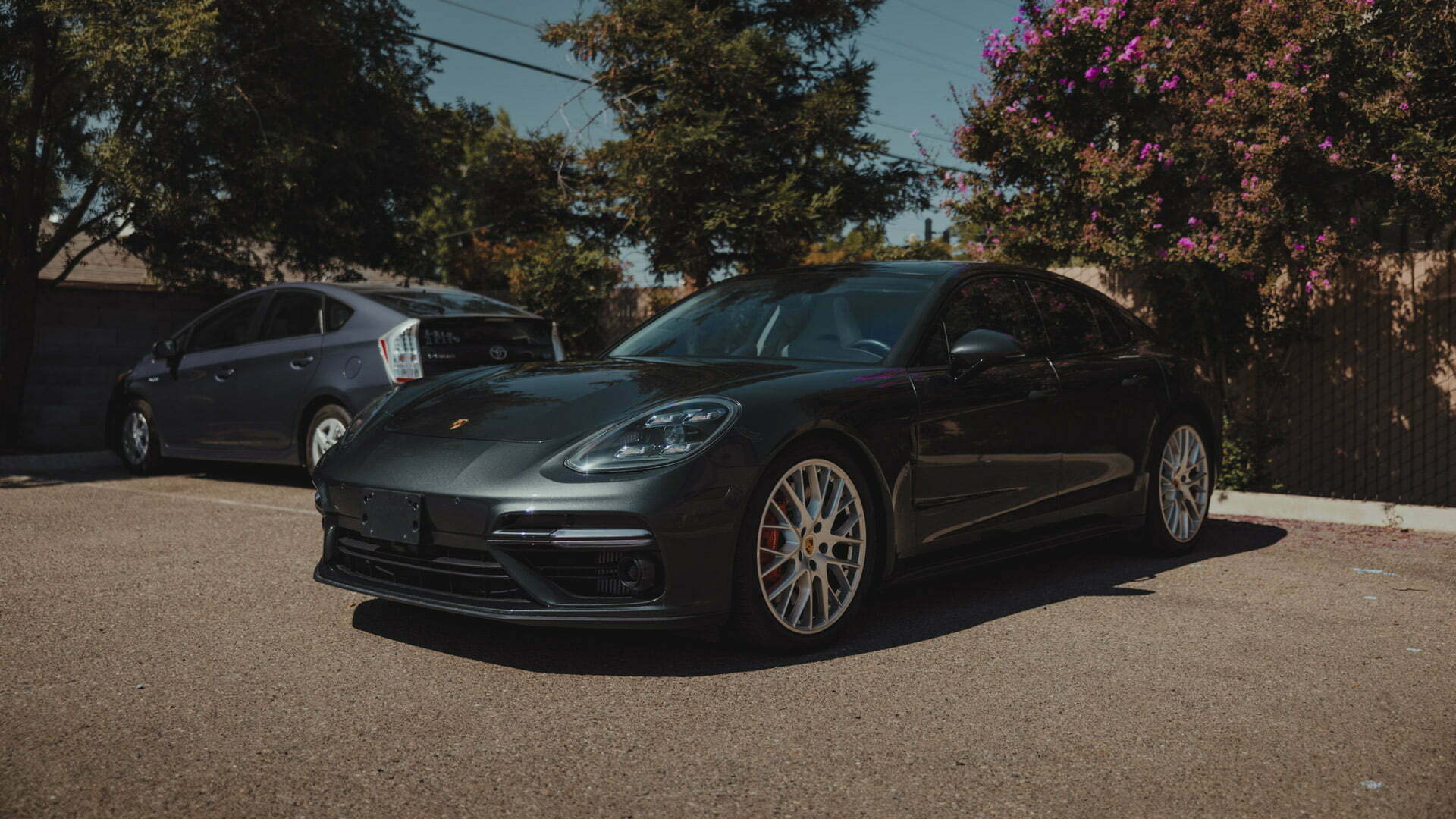 #1 It is cheaper than paying for a new paint job.

When you first get your car, it’s shiny and new and perfect. But then, over time, it starts to lose its luster. The paint gets chipped, the interior gets stained, and you start to think about getting a new one. But wait! There’s a better way. Investing in XPEL Clear Bra now will definitely save you headache and money down the road. PPF protects your car’s paint from the elements, and XPEL is the best of the best when it comes to PPF. Not to mention, the cost of a paint job will cost you anywhere from $1,000 and $20,000. But let’s get real most people won’t be going for the cheapest or the most expensive paint job. What we are saying is repainting your vehicle with quality car paint that provides good results will cost between $2,500 and $5,000. So do yourself a favor and invest in XPEL Clear Bra now! Thank us later.

#2 It will transform your car.

Have you ever wished your car could just heal itself? Well, with XPEL’s self-healing paint protection film, that dream can become a reality. PPF is a clear film that is applied to your car’s paint, and it helps to protect against swirl marks, scratches, and other forms of damage. The best part is that the film is self-healing, meaning that minor scratches and scuffs will disappear right before your eyes. XPEL offers a few different types of https://www.xpel.com/ultimate-fusion-hydrophobic-paint-protection-film

, ULTIMATE PLUS, and STEALTH. ULTIMATE PLUS has a glossy finish, while STEALTH has a satin finish. Both films offer the same self-healing properties, so you can choose the one that best suits your needs.

#3 Increase the resale value of your car

Imagine it: selling your perfectly-maintained 10-year-old car that still looks like it was born yesterday. With its smooth, shiny paint, sparkling headlights, and immaculate bodywork, it certainly would make a great impression on any potential buyers. Even if the car’s interior is a bit smelly from years of fish stick dinners and I’ve ignored the oil changes for the last 50,000 miles, you’d be hard pressed to say that it doesn’t look beautiful on the outside. And let’s face it – in today’s world of fast-paced lifestyles and endless demands on our time and attention, sometimes looks really do matter. Just think about all of those fancy PPF or XPEL coated cars out there – they wouldn’t have such perfect paint if there wasn’t a huge market for cars that simply look great.

Listen, paint protection film isn’t for everyone. If you want to keep your paint shiny, protected from the elements, then WrapBros Autospa – Paint Protection Film | Ceramic Coating Fresno | Vinyl Wraps is the place to get it done at. We work on high end cars and deliver high end results. We use only the best materials such as XPEL and guarantee your car will look better than the day it came in to our shop in Fresno, CA. So visit our shop here or take a look at our packages to learn more about what we can do for you.

WrapBros AutoSpa is the only place in Fresno where you can bring your car in for high quality auto restyling and detailing.

By clicking on “Get A Quote” you are consenting to be reached out to by a representative of WrapBro’s Auto Spa to follow up on your quote request.

Designed by Hyperboost USA in California

When it comes to protecting your car’s paint from the elements, there are a ton of different options out there.
Read More

By clicking on “Get A Quote” you are consenting to be reached out to by a representative of WrapBro’s Auto Spa.

These specials are on a first come first serve basis. Pricing depends on your vehicle.

Get A Quote
Ok, Thanks